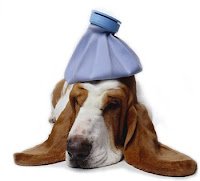 Had your fill of health insurance reform yet?

Apparently the residents of California haven’t.

There is a bill making its way through that state’s assembly that would reform pet health insurance.

I don’t know of any friends who have pet health insurance, but apparently some of the people in California who have paid for that coverage aren’t happy.

But let’s back up a minute.

Between 2000 and 2005, veterinary costs increased 70 percent according to the bill’s analysis. During 2009, Americans spent $12 billion on pet care.

Consumers are turning to pet insurance to mitigate rising costs. The Humane Society of the United States—which has spent $27,000 lobbying for passage of the bill—says there are 170 million dogs and cats kept as pets nationwide. Only about 1 percent of those pets are covered by health insurance.

This may seem absurd to you and me, but the bill looks like it's headed for a vote.

I don't think so, but what do you think?
Posted by Daryl and Jody Donohue at 5:33 PM