Did you hear the one about the girl who had a chicken? 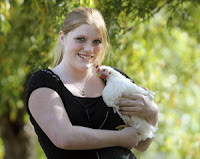 Whitney Hillman a high school student from Concordia, Kan. kidnapped her chicken, Chicklet, to save it from being slaughtered as part of an animal science and food production class.
The teen who says she loves animals and wants to study zoology enrolled in an animal science and food production class.  Because I grew up on a farm, I realize that some animals are destined to enter the food chain, but apparently she did not.

When she found out that she would have to raise the chicken and then slaughter it, her feathers were ruffled.  With the help of her parents, she and Chicklet flew the coop.  Chicklet has apparently gone into the food animal protection program and Hillmen landed 2 days of in-school suspension.

I have some mixed emotions about this story.  I don't know why Hillman couldn't opt out of the class or simply talk to the instructor about her feelings about not killing the chicken which she says became her pet.

But 98% of America is disconnected from where their food comes from, so I'm all for a class that educates those who do want to learn the process from egg to chicken fried dinner.

What is the happy medium?