The right kind of Green Revolution

Bill Gates just might be the best advocate agriculture has at the moment. 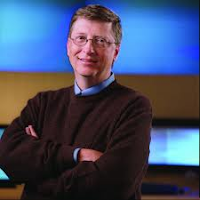 In his 2012 annual foundation letter, Bill Gates shines a light on the need for expanded agriculture production and more focus on research to deliver new solutions and approaches to improve the lives of the poorest people on the planet.
Because of the philanthropic causes he’s been involved in, he has seen firsthand the food insecurity that exists around the world and he wants to do something about it by encouraging more research to improve productivity in the sector.
From his letter…
"We can be more innovative about delivering solutions that already exist to the farmers who need them. Knowledge about managing soil and tools like drip irrigation can help poor farmers grow more food today."


He encourages a “Green Revolution” meaning a new era of research and development that is similar to what happened in the 1960s and 70s when according to his letter “Norman Borlaug and other researchers created new seed varieties for rice, wheat, and maize (corn) that helped many farmers vastly improve their yields. In some places, like East Asia, food intake went up by as much as 50 percent. Globally, the price of wheat dropped by two-thirds. These changes saved countless lives and helped nations develop.”
He speaks of the 1968 book The Population Bomb by Paul Ehrlich that predicted that hundreds of millions of people would starve to death because production couldn’t keep up with increases in world population rates.  He credits the “green revolution with staving off those predictions and causing food costs to drop dramatically from 1970 through the 1990s.  Food prices have been climbing during the past decade and that has him concerned for the poorest of the poor."
Before this green revolution, he sites that 40 percent of the world’s population was poor compared to the 15 percent today.  Reading between the lines of his letter, one can see that he’s worried that as food prices climb—for whatever reason—we could see those rates rise dramatically.
Now I don’t know what Bill Gates knows about modern agricultural production practices, but I’m optimistic that he is realistic about using science and technology to improve yields and cut costs.  I hope he isn’t implying that funding for small ag should trump investing in large ag.  I believe investments in ag must be made in the vein of helping “all boats rise together” or we will not see the advancements needed to support the population boom expected in the next 40 years.
I do like that he’s raising the issue.
Whether it’s a large U.S. farmer feeding 130 people or a mother in Tanzania who produces enough to feed only a hand full of people, all of agriculture can benefit from increased investment in research.
What would your biggest priority for investment be?
Posted by Daryl and Jody Donohue at 7:17 PM